Below is what they both looked like prior to treatment although the one shown was the only one that had a breakage.  Both backs had had marbled paper stuck to them which had deteriorated and split so I removed with moistened with de-ionised water. 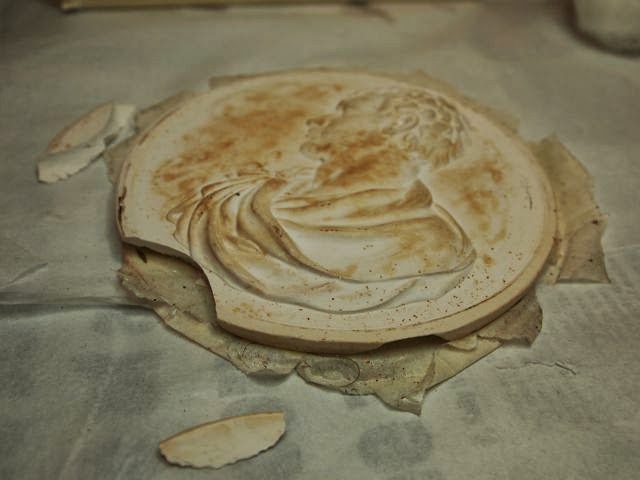 I found some marbled paper which was similar to what I had removed.  I stuck this on the rabbit skin glue.  The brown stains were removed using a weak solution of hydrogen peroxide.  I then airbrushed with a fine coating of Primal B60A from Conservation Resources.  Primal (Rhoplex) B60A is a water based acrylic emulsion for consilidation of the plaster. 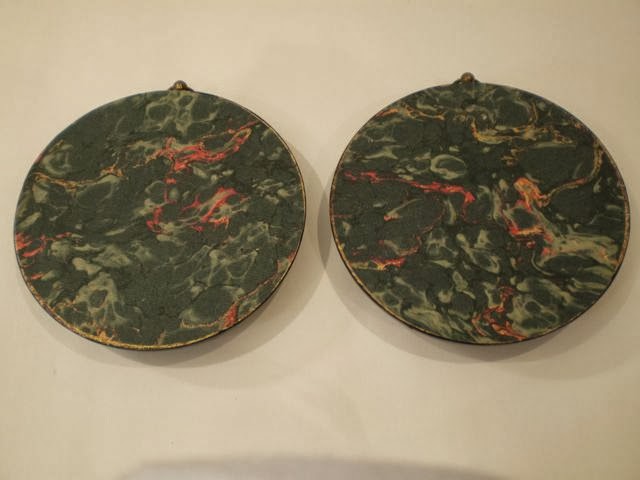 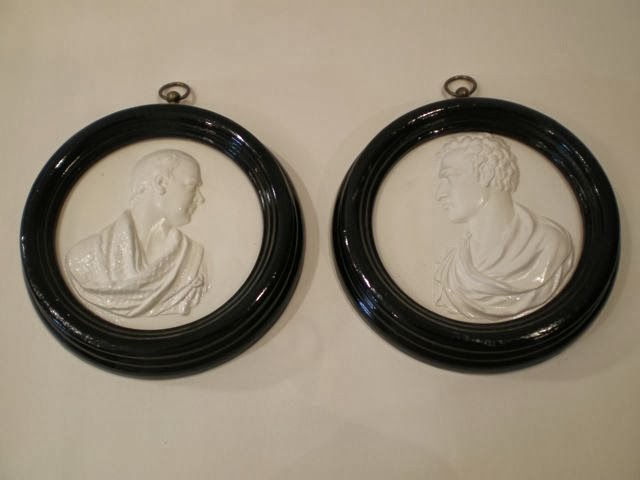 BROKEN BASE OF TERRACOTTA SCULPTURE

The base was broken into four pieces.  It is made of earthenware, so not fired to a high temperature.  There was also a crack across the back right which was stable but needed consolidating which was done by brushing Paraloid B72 5% in acetone.  I stood the sculpture upside-down in a plastic dustbin using wedges of Plastazote to protect the surfaces on the sides was done to fit the base onto the main sculpture.  After an initial coat of 5% Paraloid in acetone to consolidate the friable break edges. After allowing time to dry overnight I used a 20% Paraloid mix as an adhesive using magic tape to hold together.  Fills were done using Fine Polyfilla with historic pigments to match the fired clay body.  Touching in was done by painting using Golden acrylics (airbrush and heavy body colours). 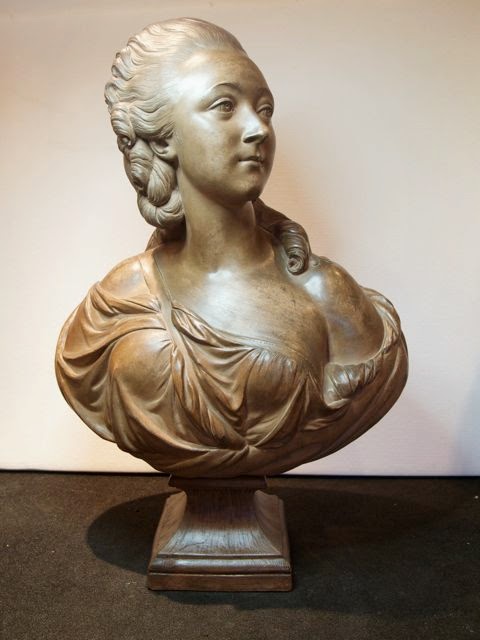 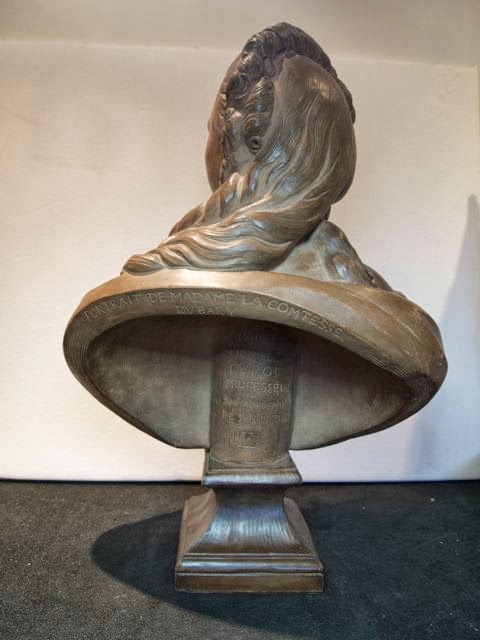 I also touched in colour to match along the crack at the back and loss of patina on the nose where it looked like water had been dropped.  In some places the patina wash was showing signs of delaminating so I sprayed both the base and the uper sculpture with Paraloid B48N in Xylene, which is a harder resin than B72.


This little murano hand blown glass vase, 5" high, had two handles that had broken off and another handle with a chip loss.  I cleaned using acetone and swabs and used clear special epoxy as adhesive to re-attach the two handles.  For the chip I used partially cured clear epoxy that I 'blobbed' onto the area.  Unfortunately I don't have a final picture as the client came to pick it up before I had a chance!

Broken spout re-created and rivets removed from handle and filled with special epoxy and historic pigments to match colour.  Rivets were also removed from the jug handle and the plate.  Getting this colour drove me mad!! I needed to get it opaque like the wedgwood blue.  I used a pencil encircled with acetate which the epoxy doesn't stick to to get the shape of the spout end. 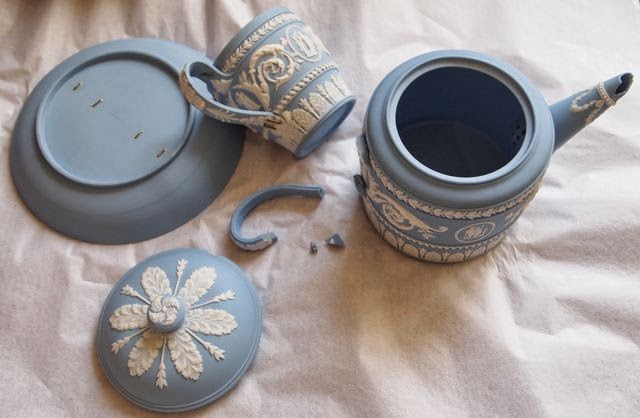 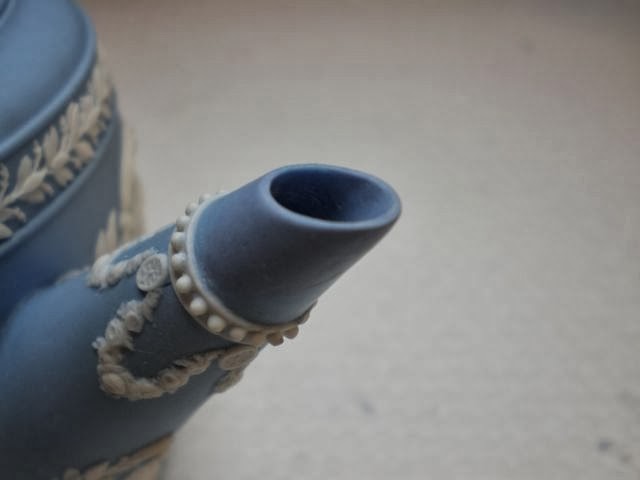 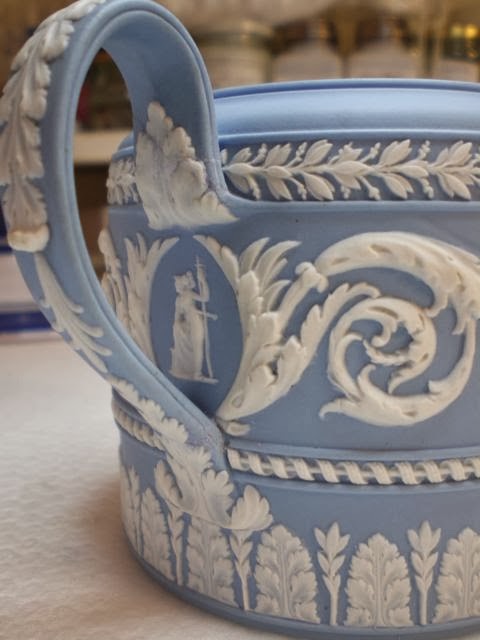 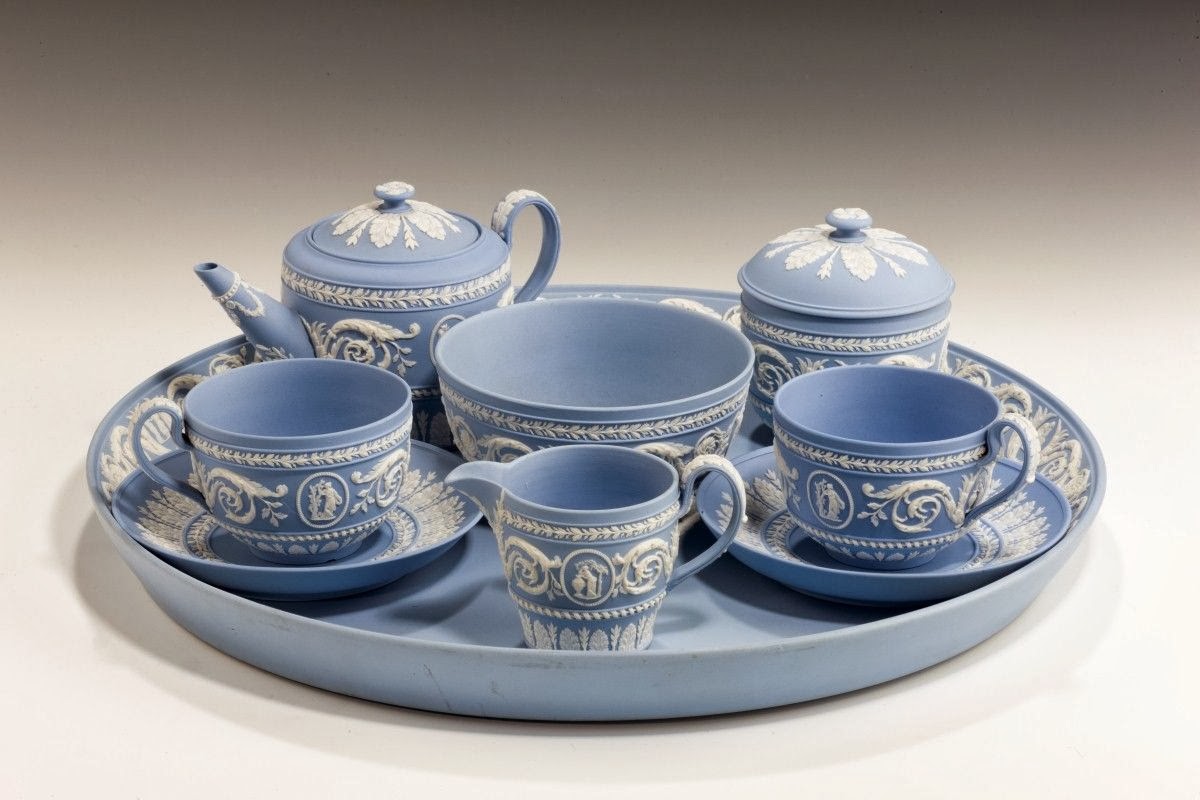 Here is a photo of the complete tea service which I had previously not seen as I had only been given the bits to restore.  It's really lovely isn't it? 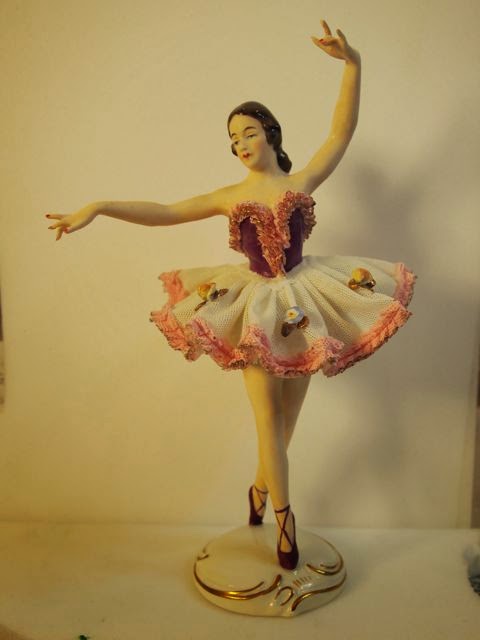 This is a piece that was only four inches in height with a broken finger on the proper right hand.  I made a rod of tinted special epoxy tinted with historic pigments and adhered it to the hand.  The first one was successful but whilst trying to polish it pinged off and was lost, so I had to do it again. 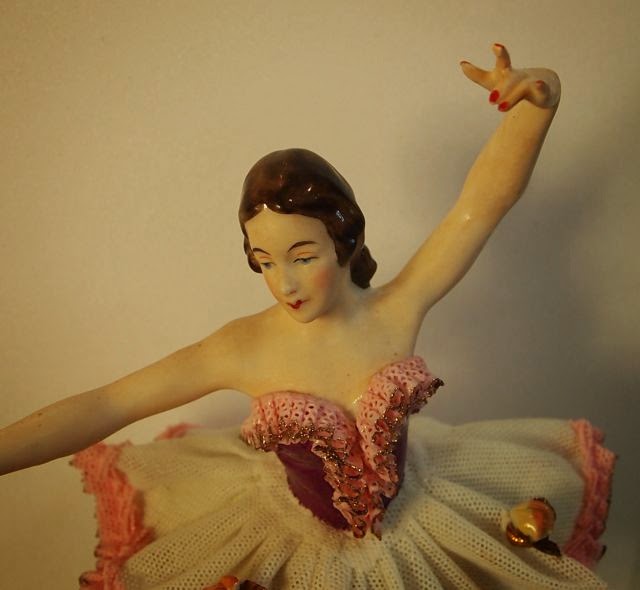 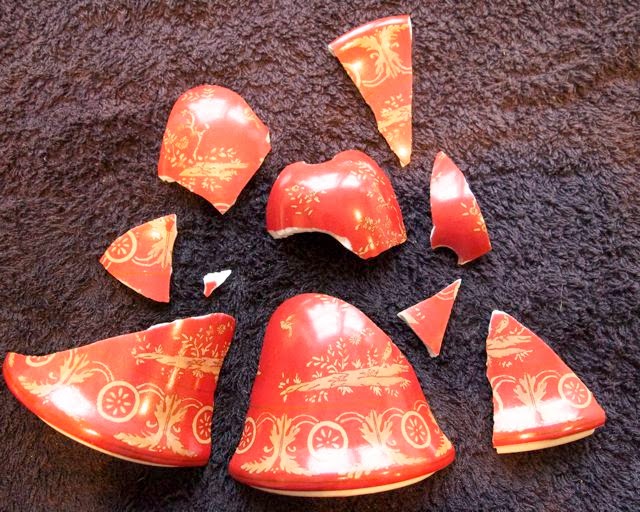 This was a bell that was part of a larger collection.  It had broken when the client's nephew was dusting!  He was very anxious to get it put back together. 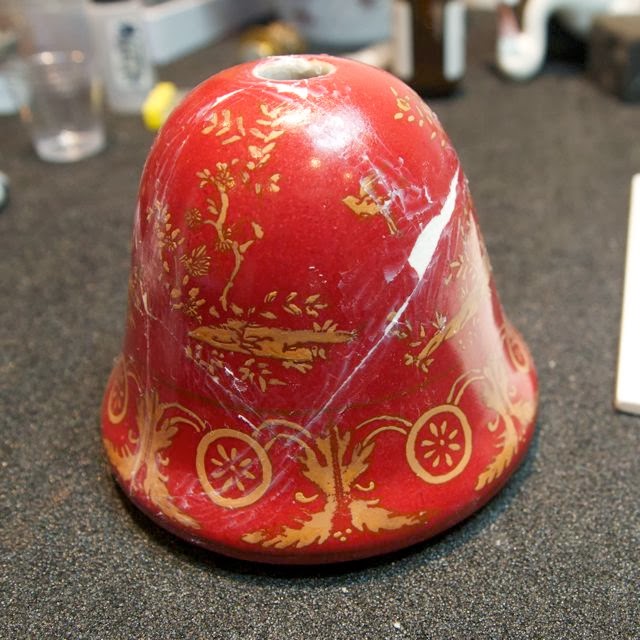 It was high fired stoneware so therefore I could soak and steam clean.  The body fill was done to match the body of the bell.  When cured I did the fills using pigmented special epoxy to match the colour of the red/rust coloured body. 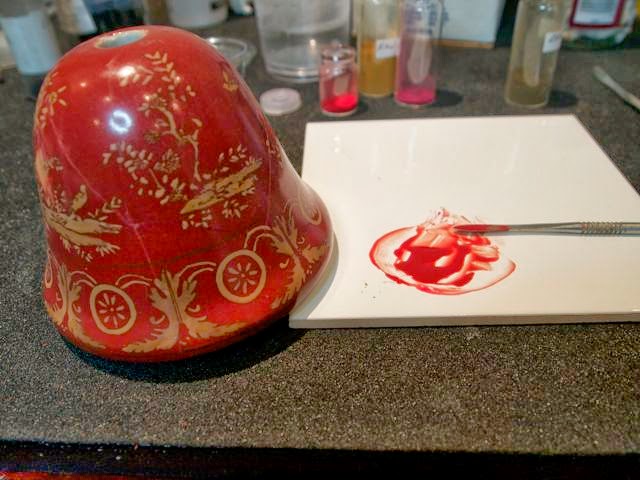 After that had cured it was rubbed down with micromesh and finally polished with Greygate Plastic Polish with a soft cloth. 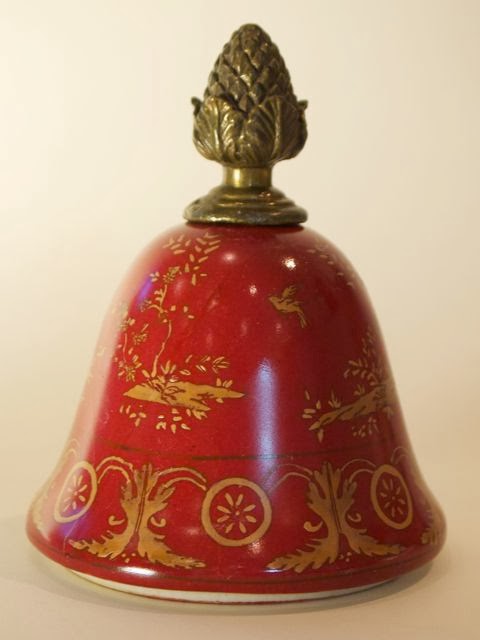 Ta Daa! finished bell with metal bud fixed on the top.  It can now join the other bells in the lady's collection. 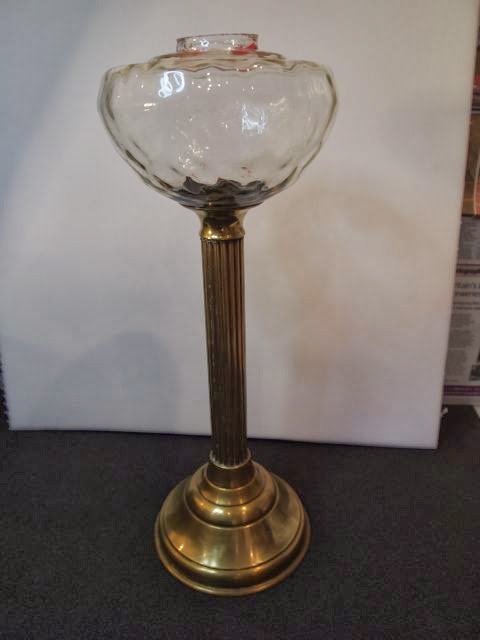 The glass bowl had been broken on this oil lamp and there was a hole where the oil was pouring out.  I was unable to undo the screw that held it in place so had to repair the glass break with the base still attached. Using special clear epoxy I blocked the hole using mouldable wax sheets and acetate. Acetate film is easily removable from the epoxy when it has cured.  I was then able to pour special clear epoxy into the lamp using a pipette from the top opening. 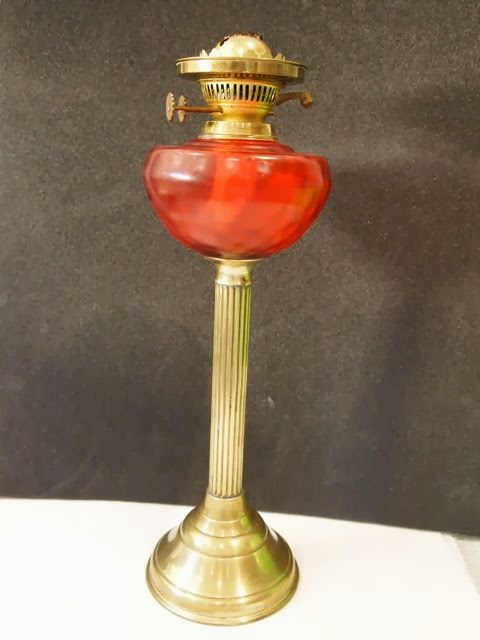 After the bowl was now able to hold oil, I matched the colour of the lacquer coating that had
been on the original lamp.  Prior to spraying the colour on I masked the lower part of the lamp to protect from overspray.

This blackamoor was bought at auction knowingly with the damage and dust.  I detached the bust from the wooden base and replaced the lower section with a black marble base which gave better stability.  She was very dirty and after having done solvent tests on the painted surface.  Best results were achieved with de-ionised water and vulpex (10%) using cotton swabs.  I then consolidated the exposed terracotta on the ridge of the bra top and the nose break edges with Paraloid B72 5% in acetone using a brush.  Using pigmented special epoxy I built up the ridge of the dress and the nose colouring with powder pigments.